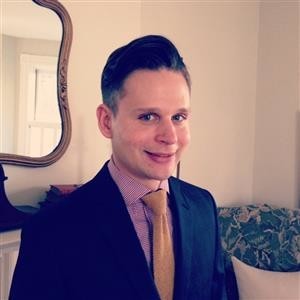 Chris Coia, USC Upstate (English ’07), now works as a Project Manager for the Copyright Clearance Center (CCC). Before his career move, English major Jacquelyn Lancaster (’19) caught up with him to discuss his work as an Associate Product Designer at John Wiley Press in Boston where he enjoyed his work with the publishing company for ten years.

Chris Coia and I conducted a long-distance interview, but even without a face-to-face interview, he was engaging and happy to talk about his path from college to career.

At Wiley, Chris has been doing something a little outside of the box as a Product Designer for career center websites. He has learned how to move up with the times, going from his first position of editing medical journals, to managing the majority of the Web journal content and partnerships available through their current open access publishing system.

I asked him how he ended up working on websites. “Honestly, it wasn’t really on purpose,” he said. That’s what the company needed so that was where he went. He has a lot on his plate each day, but he enjoys it just as much now as he did ten years ago. His work uses his English background and his undergraduate program every day. He has to manage products, accounts, and relationships with their contributors. He said he gained problem-solving skills and the ability to deal with complex ideas, as well as handle team situations in which he needs his communication to be clear and succinct.

He finished a master’s degree in 2008, and planned to continue to a Ph.D.; however, concerned that wouldn’t be a good investment, he decided to look into the publishing market instead. Publishing was a passion of his. He had initially decided to seek his undergraduate degree in English because he “loved to read novels.” Taking other classes to search out interests, he found he always gravitated back towards the English courses.

There was a definite smile in his voice when he said, “Can I give a shout-out to my professors?” I loved this.

“Part of what I liked about the school [USC Upstate] was that if you were interested in a subject, the professors were willing to spend extra time, even outside of office hours, to foster that interest.”

Chris mentioned numerous times when he stopped by a professor’s office or got to talking after class, and they always seemed happy to speak with him about their subjects. He specifically remembered Dr. Canino, Dr. Williams, and Dr. Kusch. He said they helped him during his undergraduate career, and then did everything they could to help him as he moved forward; supplying advice, support, recommendations, and other assistance for the daunting new journey towards grad school and beyond.