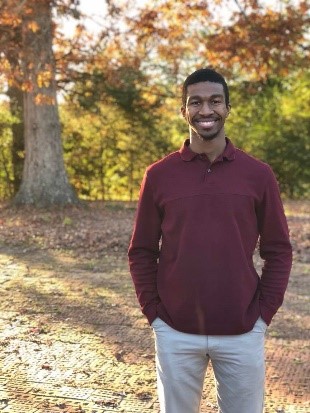 Kylin Hunter, USC Upstate (English ’16), fully believes in his skills and the importance of writing in today’s world.

Kylin’s current position is an OnPage Administrator for TheHoth. This is a recent promotion for him, but he has been with the company since 2018. He started as a writer for the company, which specializes in optimizing businesses’ website traffic. The initial work consisted of writing articles for the businesses his company is affiliated with. Now, he works directly with the businesses to collaboratively boost their keywords and Search Engine Optimization (SEO). He says he still writes for the companies and creates topics, but he is focused more on the entire website than individual articles.

Kylin is very passionate about writing, and I asked him how his current position uses English and communication skills to affect change in the world. He said that writing in his position “improves the world from a business standpoint. By helping businesses be more approachable, we are helping the people who can benefit from those businesses.”

The businesses his company works with have great missions and they often are aiding the individual consumer by getting them in touch with the right business. “Using words helps make that happen,” he said.

When asked if any specific courses helped with his current job, he didn’t hesitate to point out creative writing courses as absolutely necessary. This is because these courses “do two things: they force you to find your own ideas and to be unique in your writing style.”

He pointed out that actual writing jobs will want you to have your own style, not exactly the formal work of scholarly essays, but “an ideal flow of creativity.” The companies will often provide a topic, but they won’t spell out exactly how to write it.

2,000 words in four hours is about eight to ten pages of writing. Kylin notes that creative writing courses, and his other English courses that were having him write several essays per week overall taught him to “maintain speed while retaining quality” which are vital skills for his job today.

Kylin knows the pressures of being an English major and being told that the major is not practical. He stressed that writers are needed for everything: “As a writer, as an English major, their major is still very vibrant, and needed. Stick with it, regardless of what people say.”

Kylin wanted to tell future English majors that it is not just businesses like his that need writers. “Have you watched television recently? They could really use some better script writers.” I had to laugh with him at that one. He said, “script writers, magazines; everything that I can think of needs a good writer. It is very much alive, and there will be opportunities for you.”